We purchase meat from Smithfields market daily and from a wholesaler in Thame and deliver to a number of restaurants and pubs.  We can also arrange private orders so do get in touch with your requirements.

Dean worked as a chef for 21 years and Mel worked front of
house in hotels. In 2008 we gave up the hospitality industry
for a quieter and “easier” life and soon got bored! We have
always loved food and are interested in where it originates so
thought it would be a lovely idea to get a few Chickens for the
back garden so we could enjoy fresh eggs from happy Chickens.
We also started an allotment so we could learn about vegetables
and fruit which is harder work than you think. “Why do weeds
grow quicker than vegetables?!” we often asked.
In 2010 we found a field to rent and there started our new life.
In the August we got our first Pigs and shortly after some Geese
for Christmas. In the September we got day old Ducklings and in
October we tried our hand at meat Chickens. We recently bought
some Dexter Cows to expand further our smallholding.
We have slowly grown over the years and now have Pigs, Chickens,
Ducks, Geese and Cows. We have started doing farmers
markets to promote our "home grown" produce and hope that
others can enjoy it as much as we do.

It's a hard life but a happy life. 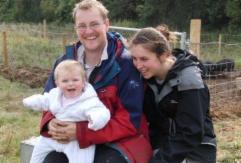 Sad news in 2015, we had a problem with a fox.  Even shutting the birds away before dark and letting them out after sunrise didn't put the fox off, he began visiting during the day.  We lost several birds including some of our chicks, ducklings and goslings which we watched grow from egg to chick.

One morning we went to open the houses and let the birds out only to discover over 40 chickens had been killed in another fox attack.  This was the final straw and we decided not to replace any of the poultry until our little visitor moved on.  We carried on with the pigs and geese, lets face it who is going to argue with an angry goose!

In early 2018 when business began to increase and time was short we decided the best course of action would be to stop rearing the animals.  We still supply meat to restaurants, pubs and the general public as we believe it is hard to get good quality produce at a good quality price.  We visit Smithfield's market in London daily and deliver Monday - Saturday.

We are located at:

If you have any queries or wish to make an order, please contact us:

Get social with us.